So tomorrow I’m bringing cinnamon rolls to work. These are not from a bakery or out of a refrigerated roll tube. These are homemade, gooey, delicious and oversized. These are the real deal. The recipe follows below.

But first, let me tell you that this isn’t just a bit of holiday festivity for co-workers. No, this is part of my work philosophy. I believe in doing a good job of fulfilling my responsibilities. But there are things that go along with doing a good job. This is what I try to do:

~ Try to say “yes” more than “no.” Be positive. I call this my “yes policy.” This is not about being a “yes man,” or about letting others dump on me. It is about being willing to try, and being gracious.

~ Smile; have an attitude of gratitude. But be sincere; you can’t fake this.

~ Commit to what you’re trying to accomplish; coach it; be it.

~ And last, bring food. I’ve never worked in any setting where good food isn’t appreciated. This isn’t about getting anything in return. This is about now and then sharing a treat, whether homemade or a pickup from the local doughnut shop. I used to buy ice cream fudge bars or ice cream sandwiches in the summer to take in at a past job. It really doesn’t matter what the treat is. Just do it, and do it regularly.

I’ve never had a failure with this recipe; it was given to me by a dear friend whose skill in the kitchen is legendary! This isn’t a recipe to make if you’re watching your calories. But for those occasions when you want a wonderful breakfast treat, to pull out all the stops, this is a winner. Although the instructions are long, each step is actually quick and easy…don’t let the lengthy instructions intimidate you!

I break this into three steps and it keeps the whole process from being too lengthy. To have warm rolls for breakfast, (this is our standard Christmas morning treat) mix the dough the afternoon or evening before. I usually try to mix the dough early enough in the afternoon so I can let the dough rise six hours and then roll the dough out and slice before going to bed. When the dough is rolled out, sliced, and the rolls are put into the baking pan, I cover the pan with Saran wrap, slide the pan into the fridge, and leave it overnight. In the morning, I put the cold baking dish into a cold oven. (Very important! Never put a cold dish into a hot oven; if the baking dish is glass it might crack.) I put the oven on the lowest temp, about 170 degrees, let the rolls rise about half an hour, or until the rolls have at least doubled in size, then turn up the oven to 350 degrees and bake the rolls for approximately 35 minutes. While the rolls are baking, mix the icing. This only takes a couple of minutes, so the whole process in the morning is just a matter of putting the rolls in the oven and drizzling the icing over the rolls after baking.

An alternative, if you have time, is to allow the rolls come to room temperature and rise till the dough is at least doubled. If your timing allows (perfect if you are serving these at brunch), just take the rolls out of the fridge in the morning and let them sit for at least a couple of hours prior to baking. If they still need a little more rising, you can always speed the process along a bit by putting them into a low-temp oven as described above.

Combine the butter, sugar and hot water in mixer bowl. Stir until butter is melted. Allow this to cool until just warm (if mixture is too hot, it will kill the yeast). Add eggs and salt to butter mixture when cooled. Combine yeast with 1 cup of warm water (or warm milk if substituting milk for water). Give the yeast a few minutes to proof (it will foam up). Add yeast mixture to butter mixture. Add flour 2 cups at a time and combine using mixer dough hook. When all the flour is added, cover the dough in the mixing bowl and refrigerate for six hours or overnight.

Filling
1/2 cup (1 stick) softened butter
brown or white sugar, 1 1/4 cups (more or less, to taste)
cinnamon (use a lot, these are cinnamon rolls!)

After dough has risen in fridge, (dough should be at least doubled in size) remove from mixing bowl and roll out on floured surface. Roll dough out to about 1/4 inch thickness in rectangular shape. Spread surface of dough with softened butter. Sprinkle buttered surface of dough with granulated or brown sugar, then with cinnamon. Cover the dough liberally with sugar and cinnamon. Roll up jelly roll fashion and slice rolls about 1 inch thick. Arrange slices in baking pan and allow to rise. You can let the rolls rise at room temperature for a couple of hours, or turn the oven on the lowest temperature (about 170 degrees) and let the rolls rise in the oven for about half an hour, as described in notes above.

When rolls have risen (at least double in size) bake at 350 degrees for approximately 35 minutes.

Icing
Combine a couple of tablespoons of melted butter, powdered sugar (I use two or three cups of powdered sugar) and milk (drizzle a little milk in until the icing is the consistency you want. It can be spreadable or pourable). Add a teaspoon of vanilla to icing and spread over warm rolls. If you make too much icing, this will keep in the fridge for several days. You can also use this icing on almost any dessert…handy to keep around for pound cakes, etc. For those who love cream cheese, add 3 or 4 oz of softened cream cheese to the icing and blend to remove any lumps.

I stumbled on this option (I was out of cinnamon and discovered my predicament at the last minute when I was making these recently) and it makes a nice citrusy treat.

All the steps for making the dough are the same, through rolling the dough out and spreading with butter and sprinkling the dough with granulated or brown sugar. I use less sugar in this variation, and I don’t measure these amounts, but I cover the dough a little more lightly with sugar than when I am making the cinnamon version. This can be adjusted to personal taste. After spreading the rolled-out dough with butter and sugar, using a jar of orange marmalade, (I use Smuckers marmalade) spread this over the sugar, roll up, and slice rolls to place in baking pan. (The marmalade can be a bit tart, and I use the sugar in the filling to cut the tartness of the orange peel in the marmalade.) Allow rolls to rise and bake as described above.

For the glaze, instead of adding vanilla extract and milk to thin the glaze, I use orange juice and a few drops of orange flavoring, or you could grate a little orange zest in the glaze if you have a fresh orange. Don’t add cream cheese…you just want to punch up the orange flavor. 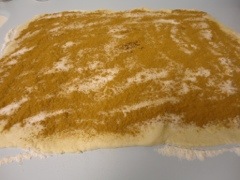 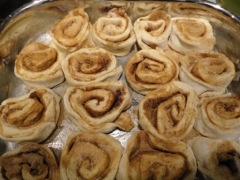 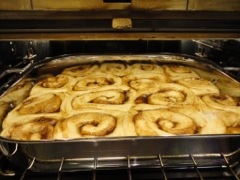 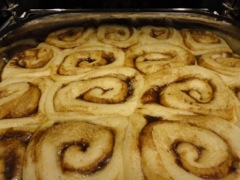 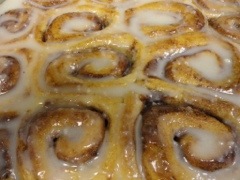